Some of the task we have to do in the garden are far from glamorous. Onc of my borders has been seriously infested with Vetch for the past couple of years and just pulling out bits when weeding wasn\’t getting me anywhere so I decided to bite the bullet and empty the border as far as possible and remove as much of the dreaded Vetch as I could. Some plants were removed, the roots thoroughly cleaned, and a new home found for them. The vetch is easy enough to spot in the soil as the roots are a vivid white so several buckets full were removed. One plant I want to retain in that border is a sizeable clump of Alstromeria. This is how the border looked in August.

So the task of clearing the border was quite a big one! I removed several Geraniums and an Osteospermum and cut back some saxifrage that was full of Vetch. The biggest job w as to lift the Alstromeria and separate the vetch from the roots.

This time of year, between the short days and the monsoon rains it is hard to get any task completed in a timely manner so it took several days to do the clearing out. When that was complete I added some tulips to the border. There were some from previous years as well as daffodils but they had got rather sparse so i topped them up! I also tried out the little dishes that you can use for tulips – I might be able to prevent the Vetch from strangling them next year! 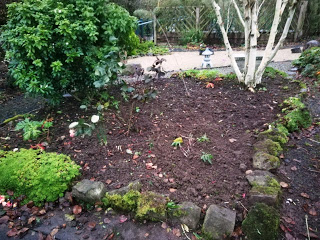 I am under no illusions that I have seen the last of the Vetch but there is a possibility that I might be able to keep it at bay a bit after all this work! All that is left now is for me to give it a decent mulch!