I ordered a \”Bumper bargain selection of bulbs\” this Autumn in a moment of madness. When they arrived I realised that I didn\’t really need all those bulbs – but I did want some of them! So I divided them with my daughter – each bag of tulips or daffodils, and other Spring bulbs. She went home and immediately potted her share up but mine reclined in the shed for a while as I decided where they were to go – I had bought three lovely matching pots so they were quickly planted with tulips – one variety in each pot. The remainder got put back into the shed and stayed there until I spotted them the other day. They still seem good so I set about planting them too. I had two large pots that I had Tulips in last year – but those tulips were replanted in the ground as I have heard that tulips don\’t do as well a second year in pots. There were 4 lots of bulbs and my recollection was that they were Narcissi of various types so I decided to put two lots in each pot. I like the idea of a mass of bulbs in pots. There are 20 bulbs in each pot and I planted them as fast as I could as it was absolutely freezing and I just wanted to get back into my cosy home out of the north wind. I brought in all the bags from the bulbs and settled down after dinner to enter them in my database. I had labelled my half of all the bags when the bulbs were divided with my daughter so it was easy to record them. Unfortunately my recollection of Narcissi being the remaining bulbs was only partly correct. I had definitely put two packs in each pot – the labels read 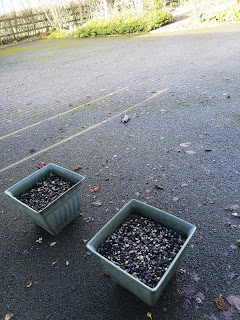 So here is the conundrum – Do I have one pot of Narcissi and one of tulips or do I have a mixture in both!!!!

I shall have to live with this uncertainty until they appear in a couple of months!!!!

3 thoughts on “Bit of a conundrum”